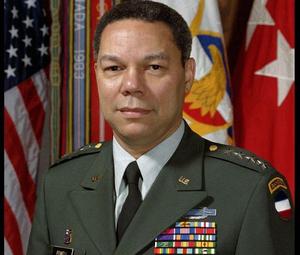 Honoring Secretary Colin Powell This week, our nation grieves the loss of a great leader, Mr. Colin Powell. His service to our country is unmatched, and his role in breaking down racial barriers in military and diplomatic leadership is monumental.
Powell was born in Harlem to two Jamaican immigrants and grew up in the South Bronx. He attended The City College of New York, where he enlisted in the Reserve Officer Training Corps (ROTC). After graduating in 1958, he was commissioned as a second lieutenant and remained in the Army for 35 years, where he rose through the ranks to become a four-star general.
Secretary Powell worked in three Presidential Administrations: National Security Advisor under Ronald Reagan (1987-1989), Chairman of the Joint Chiefs of Staff under George H.W. Bush (1989-1993), and as Secretary of State under George W. Bush (2001-2005). The common thread in each position was that Powell was the first Black person to be appointed. With only one rank higher than Secretary of State, Colin Powell paved the way for the first African American President to take office.
In 2008, Secretary Powell broke ranks with his political party to endorse a one-term senator from Illinois—Barack Obama. His endorsement was significant and testified to his impeccable character. Secretary Powell had for decades been friends with the Republican nominee, Senator John McCain. However, Mr. Powell always put his nation at the center of his decisions, and, as one who built a career on meritocracy, he was not one to sell out his endorsement over a friendship. Powell saw America’s securest future in candidate Obama. He turned out to be correct and again gave President Obama his endorsement in 2012.
Colin Powell was and will always be an inspiration to many and a role model for African American community especially our youth. He let nothing stand between himself and the goals he wished to accomplish. He did what it took to succeed within the boundaries of integrity—he showed up and did the work, and he led. Our children would do well to study Mr. Powell’s life and to model some of his character traits as they begin to forge their own paths.
Dr. Phillips, CEO
Print